Earlier, Hyundai Mobis was mainly importing all its car parts, however, this new joint venture deal would assist the company to procure high quality components, domestically. Post joint venture, the newly formed company, Jinyong Sandhar Mechatronics, is anticipated to initiate production of components at the Sandhar Technologies existing facility based in Chennai, India by August 2017.

Jayant Davar, Founder, Co-Chairman & Managing Director of Sandhar stated, “I am very happy to announce that Sandhar and Jinyong are taking their relationship to the next level by doing this 50-50 joint venture, with both partners holding equal shares.” 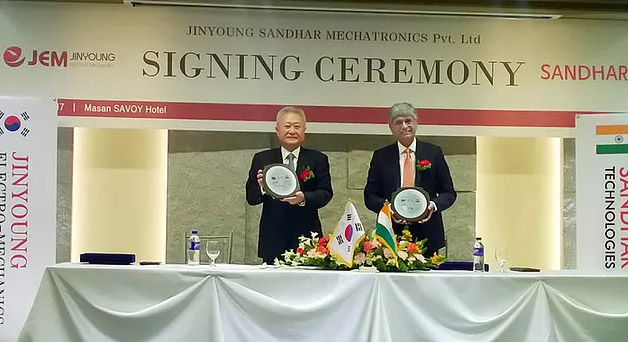 "India is a very large automotive market with a number of well-established Korean companies. The strengthening of our existing relationship with Sandhar through this joint venture gives us an opportunity to cater to Hyundai in India and expand our footprint as well,” said Doo-Yung Kim, President, Jinyong Electro-Mechanics (JEM). Besides that, JEM is also supplying Hyundai Mobis with auto components within Korea.

Sandhar Technologies is already under a joint venture agreement with JEM to produce multi-functional switches, latches, relays, switches and other products. Besides manufacturing, the newly formed joint venture would also supply audio AVN panel assemblies and switches from its manufacturing unit in Chennai.

TechSci Research believes that Sandhar Technologies is among leading automotive component manufacturer in the Indian market. The company is already manufacturing relays, plastic injected components, lock kits, switchboards, molds, latches, hinges, zinc & aluminum pressure die castings, etc. By establishing a new joint venture, Sandhar Technologies would be able to expand its component portfolio with the addition of audio panel, thus, penetrating the domestic market in an efficient way. Besides that, the company is anticipated to meet the escalating demand for auto components in the region, generating an intense competition for existing players in the industry.

According to a recent report published by TechSci Research, “India Automotive Components Market By Vehicle Type (PC, LCV, M & HCV, 2W, 3W & OTR), By Demand Category (OEM vs Replacement), By Component Type (Engine Parts, Body & Chassis, Suspension & Brakes, etc.), Competition Forecast and Opportunities, 2011 - 2021”, In 2015, India automotive industry contributed around 7% to the country’s total GDP. As per Organisation Internationale des Constructeurs d'Automobiles (OICA), motorization rate (includes passenger cars and commercial vehicles) in India increased from 20 per 1,000 inhabitants in 2013 to 22 per 1,000 inhabitants in 2014. However, automotive components market in the country witnessed a decline over the last couple of years, predominantly on account of currency fluctuations that negatively affected the country’s automotive industry. However, strong economic growth prospects, rising disposable income and expanding automobile fleet are expected to drive demand for automotive components in the country during the forecast period.

The outbreak of COVID-19 has wreaked havoc on the automotive industry – OEMs and component suppliers have been bearing the brunt of this pandemic-induced country-wide lockdown that has brought production activities of automotive players to a standstill.

Sandhar-Whetron inaugurated its first facility for the assembly and testing of rear parking assistance system (RPAS), which was made mandatory under the AIS-145 regulations for all new passenger vehicle models in India.

Heading into the new year, ETAuto reads the mind of top CEO's to showcase their strategic path in 2020